Learning and Understanding with New Perspective 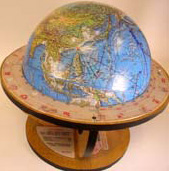 Why a Globe? Studies show that, taking the same test, college seniors of today know less about the Earth and geography than did high school seniors 50 years ago. Further, the study of history can’t be fully understood without knowing geography. What students do know primarily comes from flat maps. Flat maps distort perception of the earth. Only globes can accurately present undistorted geographic information. Today’s 12″ globes are very accurate and can be excellent learning tools. Globe stands however just spin the globe and restrict usefulness. A relief globe with very accurate subsea surface features is the most informative. We have selected the two best relief globes from Replogle, Inc and the G.F. Cram Company, but removed the restrictive metal meridian stands.

Why not Flat Maps? Flat maps of large regions necessarily distort the world and this distorted view alters our perception. Fig. 1 shows a typical Mercator projection world flat map. Fig. 2 shows the Peters Map projection, which is a flat map that more accurately portrays size and location relations. Most of us learned on a map like the Mercator projection. Compare the sizes of Mexico, India, Africa, and Greenland. Surprised at the distortions?

For more information on these differences go to the www.petersmap.com site. For flat maps, the Peters Map gives the best perspective to students as to size and to travelers the perspective of distance far better than Mercator type projections. A Globe takes away all distortions to give perfect accuracy. Accuracy requires a globe, no flat map will do.

Earth Features. The world is a near perfect sphere but it is slightly larger in radius at the equator (3963 mi.) than at the poles (3950 mi.) by 13 miles. The equatorial diameter is twice the radius at 7926 miles and the equatorial circumference is 24,902 miles.

A 12″ globe with a 6″ radius is used as a standard and we can then compare it to other meaningful statistics. The Earth has been called Pear Shaped and an Oblate Spheroid indicating it is not perfectly spherical. To regain perspective we will compare Earth features to the thickness of standard copy paper. The thickness of a common sheet of paper would represent a thickness of 2.54 miles or 13,411 feet on a 12″ globe. The radius difference between the equator and the poles is then 5.1 sheets (13 mi ÷2.54mi = 5.1) of standard copy paper. Not much. While we are much taken by mountains and oceans they are less significant in size than one would think. Mt. Everest, the world’s highest mountain at 29,035 feet, would be 2.2 sheets of paper thickness above the globe surface. The Marianna’s trench, the world’s deepest under ocean depth, at 35,838 feet would be 2.67 sheets (35,838 ft. ÷ 13,411 ft. = 2.67) of paper below the globe surface. We sent two men down to the trench bottom in the Trieste deep diver in 1960 and that’s the deepest man has gone below the surface.

The average ocean depth is 13,100 feet or only 1 sheet of paper thickness. The big deep oceans are really just about as deep as the thin surface printed paper on this globe. The land surface of the earth makes up ~30% and water ~ 70% (symbol “~” means “about”). So we live on a nearly spherical planet that’s very smooth and we haven’t explored much of it except the surface. The ocean bottom surfaces, not just the continental land surfaces are important in understanding the earth.

It can be stated that the three most important Earth reference points would be the equator and the true north and true south poles. True North and true South Poles refer to the spinning axis of the Earth and are very different from the magnetic poles, but many people think they are the same.

The equator is a Great Circle (GC). A great circle is a line around a sphere, which is the largest possible circumference and would cut through the exact center of the earth if you draw an imaginary plane.

Longitude location starting point is a man-made decision. Today the 000° point is through Greenwich, England (marked in yellow) because that was decided upon. It could have been set at Cairo Egypt or other areas as were proposed but not selected. All lines of Longitude connect to the true North and South poles, and are all Great Circles, and are called meridians. Any points north or south of the equator — on the same longitude meridian — will have the same longitude. The meridian of longitude passing through Greenwich is called the Prime Meridian. There is only one such GC line and it becomes an important reference point. Around the globe going east from Greenwich longitude, meridian lines are marked every 10° or 15° (depending on the globe) until they reach 180°, the international dateline. These are degrees East of Greenwich (030° East Longitude would locate Cairo, Egypt). Going the other way (west) from Greenwich the Longitude meridian lines are marked in the same way until they also meet at the 180° mark. Chicago, Ill would be at 087° West Longitude. All 360° of a circle in both Latitude and Longitude are used but are called out differently. Latitude is read 000° at the equator and goes up to 090° at each pole. North and South Latitudes are designated as 030° North Latitude, or 063° South Latitude, etc. From England at 000º and going west past the United States we have 180º West Longitude (from Greenwich). Going East from 000º, past Japan, we arrive at 180º East Longitude (from Greenwich). Both East and West meet 180º away in the Pacific at the International Date Line.

Now would be a good time to understand some of the inside structure of the Earth. We will use two graphics from NASA that illustrates the commonly accepted size and composition.

The Earth has a radius of 3,963 Miles. Most of the volume of the Earth is made up of the Inner and Outer Core and the Mantle. The radius of the Inner Core is ~800 miles and the Outer Core radius is ~1400 miles. That’s a total of 2200 miles of core in radius or a total of about 55% of the full Earth’s radius. The Mantle is ~1800 miles thick. Add those together and you get 4,000 Miles, which is greater than the total. There are some averaging errors but it points to the fact that the crust we live on is extraordinarily thin. The second picture shows that the Continental crust (land above the oceans) is 10- 70 kilometers thick. In miles, that is 6.2 to 43.5 miles thick. Some parts of land have deep roots going down over 100 miles, but that’s not the average. On our 12″ Globe using our paper thickness perspective that would mean the thick land crust we live on would be about 2½ to 17 sheets of paper thick. What about the crust under the oceans? It is not the same as the crust on the Continents. It is made of different material, somewhat heavier, and much younger. While the land crusts are up to 4 Billion years old, the oldest ocean crust age is only ~200 Million years old. That means that ~70 % of the Earth’s surface is very young. It was formed from the lava flowing from the undersea volcanoes in mid-ocean ridges. It is shown to be 5 – 7 kilometers thick, which is 3.1 to 4.3 miles thick. Our sheet of paper perspective says that the land crust under the oceans is from 1 to 1.7 sheets thick. Quite a difference from the continents.

Table 2. Paper and inch thickness perspective to a 12″ Globe with 6″ radius

This may help to understand how much of the earth is the core and mantle. These parts are very different from the crust we live on, drilled into and have explored.

We also now know that the thickness of a sheet of paper represents 2.54 miles on a 12″ globe. How thick would be our square of humans? At an average height of 5 ½ feet that square of humans would have to be painted on to be only 1/2500th of the thickness of a sheet of paper. Very thin indeed. We would need a high power microscope to even find ourselves. This perspective is two-fold:

The Earth in Relation to the Solar System

For a more personal perspective consider driving 25,000 miles per year for 40 years. That would be a total of 1,000,000 miles driven. That would be more than the average in a lifetime. You would go just 126 feet on our model and that would take you to the moon and back twice. If we tried to get to the sun we would get just past 1% of the way.

This Solar System is big.

Only a globe will put land and sea features into visual perspective. A 12″ globe let’s us put size and depth into consistent perspective by using paper thickness and inches. That same 12″ globe let’s us understand Earth’s movements. We are small. Earth features are also small. Yet, we have barely scratched the surface of our understanding of the Earth.

The 12″ globe also builds a model of the solar system that is understandable in size and distances in human terms. The Solar System is huge. Man hasn’t ventured past the moon. Our earliest probes sent out 30 years ago are just now at the edge of this system. The Sun could contain 1.3 million Earths. Nine planets and multiple moons orbit the sun and all are distinctly different. As we learn more about each of them they present unexpected mysteries.

We develop our scientific laws based on the facts we know, as we should. But then we assume they all apply to the entire Universe. Perhaps. For perspective, let’s understand the size of the universe. For each of the 6 billion humans on our planet, their “fair share” would be 20 full galaxies apiece, with 100-200 Billion star systems in each one. Four Trillion Solar Systems for each person. They also would get a share of the missing 95% of mass and energy necessary to make the best science theories work. That means 20 times even more than 20 full galaxies. That’s 400 full galaxy equivalents for each human being. I’m thinking we will find new things when we get there. I’m thinking a little humility and open mindedness are called for when it comes to different potential theories. Start with a 12″ globe. Start with an understandable perspective.